Philippe Halsman, the Duke and Duchess of Windsor, 1956

Ha! Yes, of course, Philippe Halsman, the photographer who would make his models jump in the air so as to allow them to relax and express their true personality! Indeed, this is what first comes to mind when one thinks about him (and, indeed, seeing how superbly ridiculous the Duke and Duchess of Windsor appear, one can imagine the amount of work necessary to loosen up the posing models).

But does the model really want to reveal his “true” personality? Take the case of Marilyn Monroe: Halsman, who practically discovered her in 1949 while reporting for LIFE in Los Angeles, had her jump in the air in 1954. The actress did so only once (pictured above), and refused to try again, afraid to reveal in such a way her true personality behind the gloss and glitter. In 1959, having become a great star, Monroe accepted to try out the jumpology trick again. However, in the end, it took more than 200 jumps and three hours to produce photographs that both the photographer and the actress liked –not what we would call spontaneous images.

Above all, Halsman was a great portraitist. The exhibition at the Jeu de Paume (until January 24, 2016) lines up excellent portraits, whether they feature his pre-World War II Parisian models (such as this saturated Malraux from 1934) or belong to series he produced with Marilyn but also with Dalí or Fernandel.

One of the most psychologically revealing portraits is probably Bobby Fischer’s. The chess champion appears somber and focused, completely introverted in his world, with the strong effect of the chessboard’s black and white squares.

Yet Halsman’s curious spirit did not limit itself to his models’ psychology and their relaxation through jumping. The photographer also excelled in perfectionistic staging, such as in this “Dalí Atomicus,” for which assistants threw cats and water on the painter in mid-jump until the perfect photograph was captured. It took 26 attempts and five hours to synchronize the throwing of cats and water with Dalí’s jumps…

Another curious experiment led to this attempt at melting Dalí’s face to make it coincide with a softened watch. A duplicate on glass had to be produced, and then the emulsion was melted and manually distorted to result in this dripping face. A demonstration of the plasticity of photography (analog photography, of course), and of its ability to match shapes rather than to reproduce. 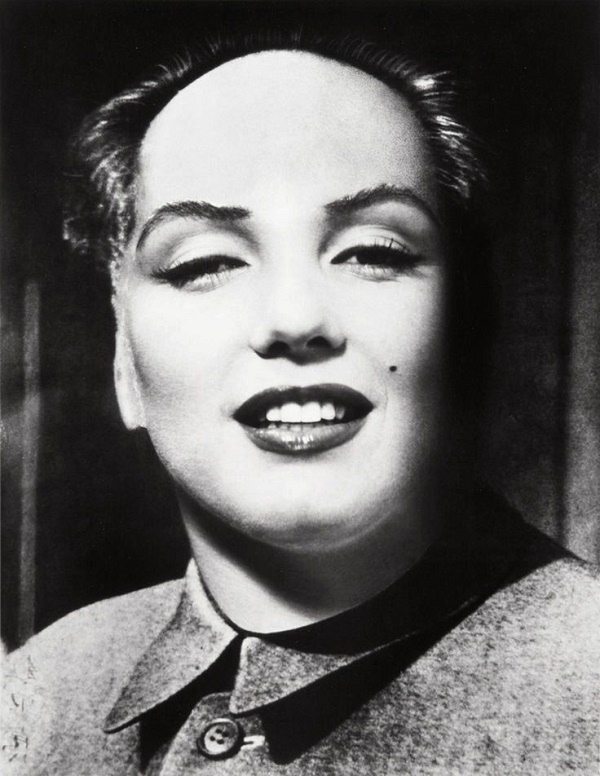 This combination of Marilyn and Mao’s faces is another experimental artwork: Halsman fused together two icons that everything opposes. Is it only an entertaining montage or does it belong to political criticism? We do not know, but I like to think that Halsman, a little Latvian Jew who was persecuted during his youth, had maybe remained deeply irreverent and rebellious at heart, even after having achieved fame and riches.

The other exhibition at the Jeu de Paume is Omer Fast’s; I did not have enough energy to see it thoroughly that day, and therefore I’ll report on it later.

Read this article:
in the original French; alt.
in Spanish

One thought on “Philippe Halsman, A Curious Eye”