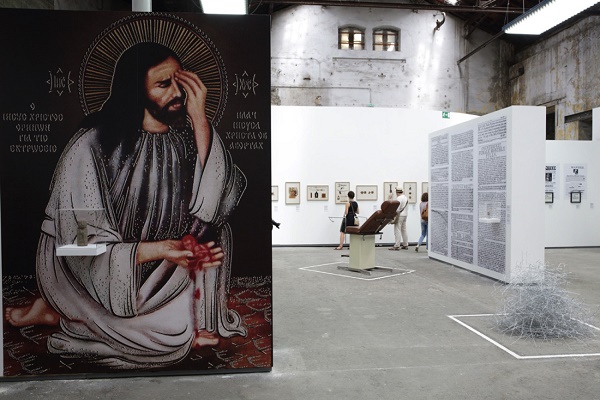 Exhibition view: Laia Abril, A History of Misogyny, Chapter One: On Abortion, reproduction of an Catholic orthodox fresco depicting Jesus Christ in lament as he holds an aborted fetus in his hand [photograph by Suzanna Pozzoli]

The Rencontres d’Arles 2015 were widely decried for their lack of women photographers: only one woman actually had a solo exhibition last year (not taking into account the Discovery Award). What’s worse, it wasn’t very good, and very stereotypically “feminine” in its theme and title, the “Coup de foudre”, i.e. [love] “At First Sight”. The message seems to have gone through to the organizers for this year’s edition –there’s even a Madame Figaro Photo Award (after the woman weekly supplement to the daily Le Figaro) for one woman photographer’s work on display in Arles.
So, an effort has been made, at least quantitatively; in terms of quality, the exhibitions are moderately interesting (as it is the case overall, in my eyes), and only one stands out from the pack, Laia Abril’s. Precisely, her exhibition has garnered widespread acclaim, and won the Award by a landslide (as I have been told).